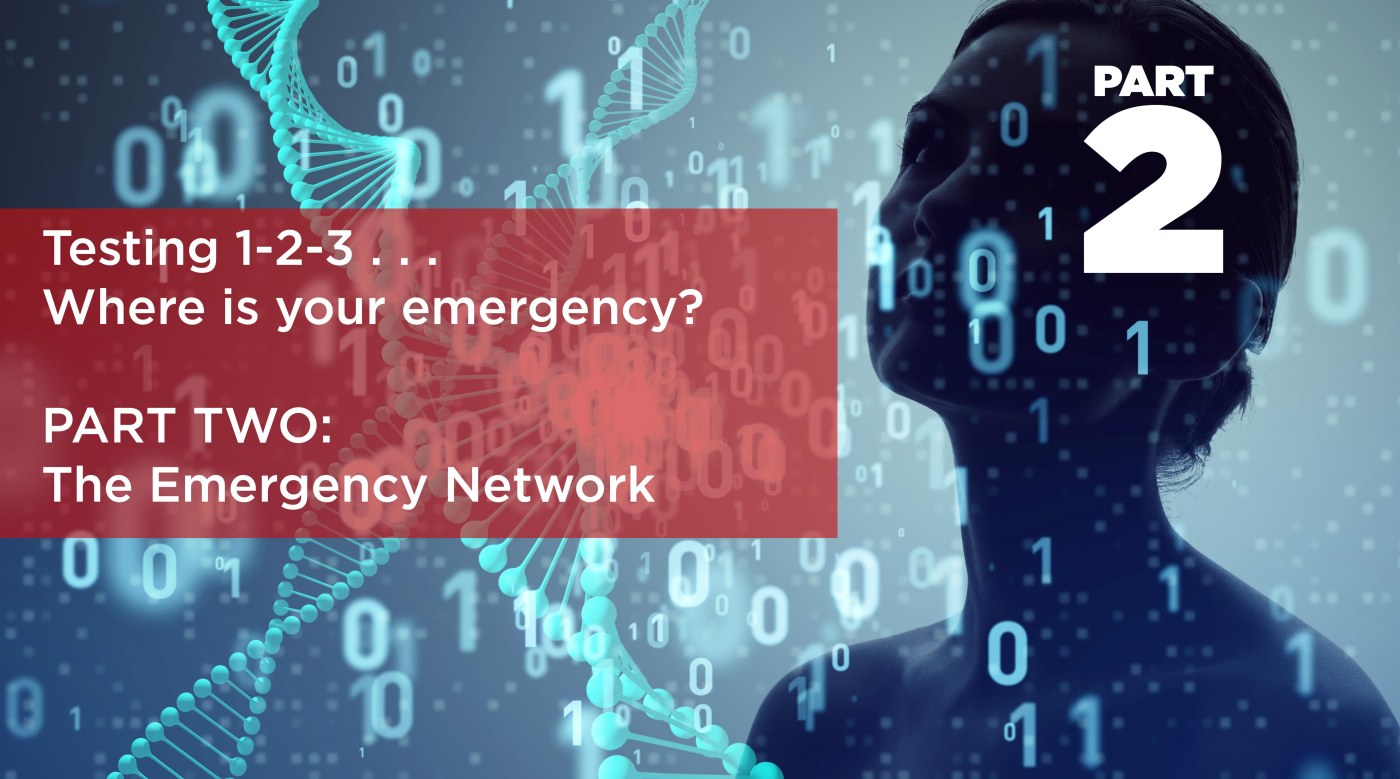 In PART One of this blog, we talked about originating the call in the enterprise and the importance caller ID has in identifying the origination point of the call accurately to the PSAP.

Now that our emergency call has made its way out of the MLTS, navigated through the local Central Office (hopefully unmodified and intact), it has now landed within the 911 tandem Central Office where it is ready for location digestion and termination at the PSAP. The selective router, typically a Northern Telecom DMS 100, or a Lucent E5, has the specific job of providing connectivity between local area PSAP’s and the local Central office switches that serve dial tone to the public. While no hard fast rule exists, it is common to find that selective routers provide service in a specific geographic area that often (but NOT always) aligns with local calling area LATA jurisdiction. Once again, it is important to keep in mind that there is no hard fast rule here. While this legacy design has worked for years, the architecture happens to be one of the many things about the legacy network that is stifling innovation today.

Enterprise telecom providers and installers should be familiar with a few essential points here regarding the local selective router service areas. As they are often tasked with provisioning the MLTS properly. Generally speaking, the selective router tandem offices are designed in a hub and spoke fashion. They supply dial tone to PSAPs through specialized analog loop start CAMA trunks. While these trunks are in fact special, from a use perspective, the technology behind them is actually quite old, and has questionable value in today’s environment, given the changing mission and the need to include data elements and multimedia with the call.

Because CAMA trunks are analog based, loop start circuits, they are electrically no different that the POTS line that feeds your home. One important difference is that instead of normal DTMF tones, they utilize MF Tone signaling. Despite this, the most important characteristic is that they are ANALOG and NOT DIGITAL circuits. This means that any signalling between the endpoints of the circuit MUST be either voltage changes on the line (called battery), or in-band audio, leading directly to the first important point.

Caller ID / Location and E911
For calls transferred into the 911 tandem from the Local Central Office, the Caller ID takes on a level of implied authentication, and is matched against a selective router database table (SRDB) that determines the appropriate ESN or Emergency Service Number of the PSAP responsible for that physical address.

You can think of this Selective Router Service Area environment similar to a localized CENTREX model, with all of the PSAP’s interconnected by analog CAMA trunks. Calls can be transferred from one PSAP on the same selective router, to another PSAP on the same selective router simply by issuing a flash-hook on the CAMA trunk, and then dialing the ESN of the desired destination PSAP.

This architecture eliminates the need for the transferring PSAP to hold the bridge on the call, which would tie up dual trunks to initiate the transfer and hold up the call connection. However, it limits where calls can be transferred, as the destination PSAP must be getting service from the same selective router as the originating PSAP. The exception to this rule would be in areas such as New Jersey, where the four selective routers servicing the state are interconnected with an SS7 network, and any PSAP can transfer to any other PSAP within the state network.

In areas where there is no inter-selective router connectivity, transfers to a PSAP that exists in a remote selective router must be accomplished using a 10 digit administrative line over the PSTN. BUT – because this call is going through the public toll network, the transferring PSAP must hold the bridge together between the caller and the transferred to PSAP.

Another downfall of PSTN based transfers is that it is often impossible to pass any data with that call (even caller ID), as these circuits are capable of voice only traffic, and the foreign exchange PSAP may not have access to the originating PSAP E911 network ANI/ALI database. Since selective router service areas never cross state borders, adjoining states with large population centers within their boundaries can find it very difficult, if not impossible, to pass calls between them efficiently.

A scenario causing a challenging problem for cellular telephones is the fact that electromagnetic radio waves never honor or limit themselves to a political border, and in fact, freely travel well beyond them. Exasperating this problem are areas where adjoining counties obtain service from different selective router facilities, such as Orange County Florida and Osceola County Florida.

A True Story that Prompted this Section
Recently, while driving west on Interstate 4, leaving NENA in Orlando, I witnessed a motor vehicle accident on the access road next to the highway. It had just happened, and were obviously going to require police assistance and a tow truck. Unknown to me, the actual location of the accident was just inside of the Osceola County border, but when I dialed 911 from my cell phone, my call was connected by the cell tower the the Orange County Sheriff’s Department 911 Center. I proceeded to explain the situation the best I could to the Orange County 911 call taker, who quickly determined that the incident was just beyond their border in Osceola County. She advised me she was transferring the call and not to hang up, and within 10 to 15 seconds, I heard the Osceola County 911 call taker come on the line. They advised them this was a transfer from a cell caller with an accident report and told me to go ahead.

I painstakingly recanted everything that I had just explained to Orange County, but the Osceola County call taker, questioned the location. I then asked if they got Phase 2 location on me, to help narrow down exactly where I was. I was then informed that because the transfer occurred as a 10-digit PSTN transfer, no ANI or ALI information was available to them.

Fortunately, both call takers were familiar with this troublesome location. Also, from the sound of it, both had their own techniques for coaxing the exact location out of the caller. However, it highlights a significant technology failure within the core E911 infrastructure, that is often masked by the hard-working dedication of our 911 call takers. Help gets to where it needs to be, despite the networking inefficiencies and technology roadblocks (like having to transfer emergency calls over the public switched telephone network) that blocks critical information from our nation’s 911 centers.

Given this example, with our cellular networks and mobility, you can only imagine the problematic environment that we’ve created in MLTS systems that’ll allow working from home with hard phones and softphones on laptops, and the connected world that we live in.

In PART Three, we’ll look at enterprise mobility, to better understand the problem, and start to explore potential fixes. Please remember to follow me on Twitter @Fletch 911, check out all of our other podcasts at http://www.Avaya.com/APN

Listen and subscribe on iTunes, Google Play Music, and SoundCloud, as well as our featured content on the iHeart radio network.