These days we are all thinking about social distancing by 6 feet, or about 2 meters. Here is something that even some of my closest friends don’t know; tucked away in a corner on my desk, there is a little box with a speaker and a microphone that can often be heard blaring out Morse code (known as CW) with station identifications. Often I’ll be asked, “Hey, good buddy! Is that your CB radio?” I laugh a bit and then explain to them, “no”, this is’nt a Citizens Band Radio – made popular in the 1977 Smokey and the Bandit movies, during the CB craze that swept the country for a few years. I’d get on and talk for hours with my friends Sunfish, Knothead. and my dear friend Panda Bear. Heck, even my Mom was on the air as ‘The Wicked Witch’, since her birthday fell on Halloween.

SIDE NOTE: Looking back, CB’s were really the first incarnation of communications enabled social media. Todays Instant Messaging, Video Chatting, and general Texting social media phenomenon could have been totally predictable – If we paid attention.

This noise, however, is not a CB. It is coming from my Amateur radio that is tuned to the ‘2-Meter Band‘ for a very special purpose.

While many of my friends from the, “Chicken Band”, got rid of their radios in garage sales and dropped all of their ‘CB Handles’ for titles with Senior and Global in them, a few of them ventured into amateur radio, and the worldwide communications that were possible on that new gear. Personally, I never made the leap; mostly due to the Morse code requirements of the FCC at the time. The neural connections that the ‘dits’ and ‘dahs’ needed to make sense in my brain just weren’t there. So I came to the realization that amateur radio wasn’t for me.

Finding Gold in Chicago
Fast forward 40 years – I find myself in Chicago Illinois as the Next Generation Emergency Communications track chair for the Illinois Institute of Technology Real-Time Communication conference. Professor Carol Davids of the Institute comes to me asking me if I need extra speakers for my track – which I did. She then offers up Bill Poellmitz. Bill is an interesting electrical engineer from Florida, with a long career in communications. He was a ham operator since he was 14, and currently owns radio call sign K1MM, in Orlando Florida. He’s segment brings in one of the last frontiers of communications to be considered in the world of “unified communications”. Thanks to the Illinois Institute of technology, his session was archived and available on YouTube here:

Inspired by Bill that year, in the late fall of 2019, I decided to take the plunge and studied for my FCC Technician class license, which I took and passed in January 2020. Over the next six months I became immersed in the culture, made several new friends in the local and distant area, and started participating in the local area VHF Traffic Nets and local RACES activities. I was amazed by the number of folks in the Public Safety industry that were also Hams, but never mentioned it before.

Officially Appointed
I was recently appointed as an official relay station (0RS) for the National Traffic System, and once a week I often spend 20 to 30 minutes on Thursday evenings as an alternate net control operator passing messages in and out of the Northern New Jersey area. While most of these are routine non-emergency messages, the strict and rigid communications practices of traffic handling have been sharpened.  I am confident that this hurricane season, if there a disaster does occur locally, I be well prepared as I have the equipment, the knowledge, and the ability to be part of a relief effort to establish communications into and out of my area. Should regular communications fail, myself along with several other operators with similar capabilities will be a key communications resource while critical utility infrastructure is restored.

Same Topology – Different Network
What I find really interesting is that the topology of the NTS is very much like the topology for the national telephone network. There are local last mile operators, regional collection points, and then entities responsible for the long-haul traffic between the East, Central and Western regions, as well as around the world. While the delivery of information may not be instantaneous – critical information on conditions, loved ones, and needed supplies like food and shelter, can be passed reliably in nearly any environment with minimal infrastructure in place.

Minimal Investment
Small handheld radios are available for less than $50, and even a higher-powered mobile radio, easily converted to a base station, can be obtained for less than $130. With one week of brush up studying, and a simple test (now being conducted online) you can be a licensed amateur radio operator and be in contact with your local support agencies and services.

Stay tuned for this year’s agenda for the IIT-RTC conference which will be virtual and available to everyone free of charge! Sponsorships are still available for the event. http://www.rtc-conference.com/2020/

An Old Fashioned Invite
Was Bill invited back? He sure was, but NOT by email or phone. I sent him a Radiogram via the NTS! 🙂 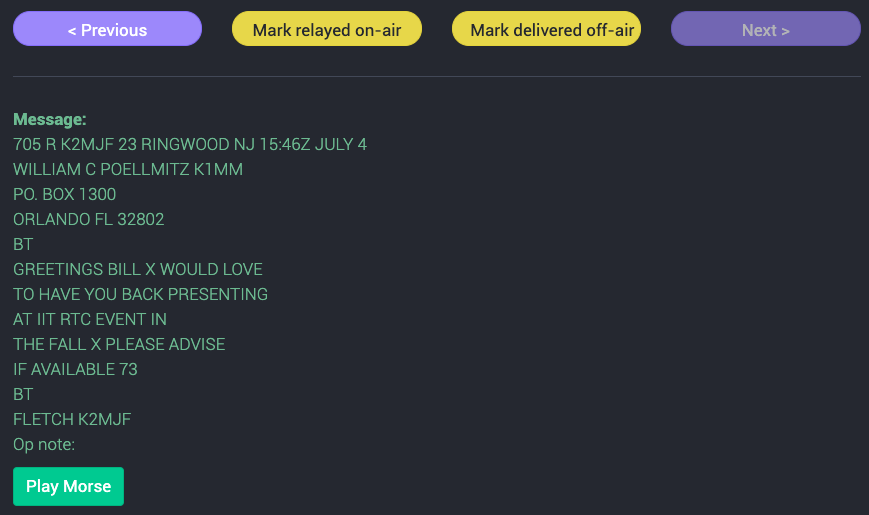 Thanks again for stopping by my little corner of the Internet, as always I hope I brought something to you that you never knew, or learned more about some thing you did know.